As a country, the US is in the process of reevaluating workforce training to fit the modern economy. The leading re-skilling models center around MOOCs (massive open online courses) and bootcamps (1-6 month cohort-based live training programs). However, neither has proven to be effective enough to face the challenge. Apprenticeship models have proven to be effective in trade professions, and they can be applied to the challenges facing other more “high-skilled” professions as well. In the long run, it is apprenticeship models rather than bootcamp models that will win out in the market due to their superior placement rates.

Due to the pace of innovation in the private sector outpacing our education system’s ability to prepare the workforce, the US has developed a large skills gap in the human capital market. Our current education system was designed to prepare industrial workers for a lifetime of conducting repetitive tasks. Thus, we put children through a standardized learning curriculum until university, where they spend 2-4 years specializing in a skillset that is meant to be leveraged for the rest of their lives, with no intention of continuous education. 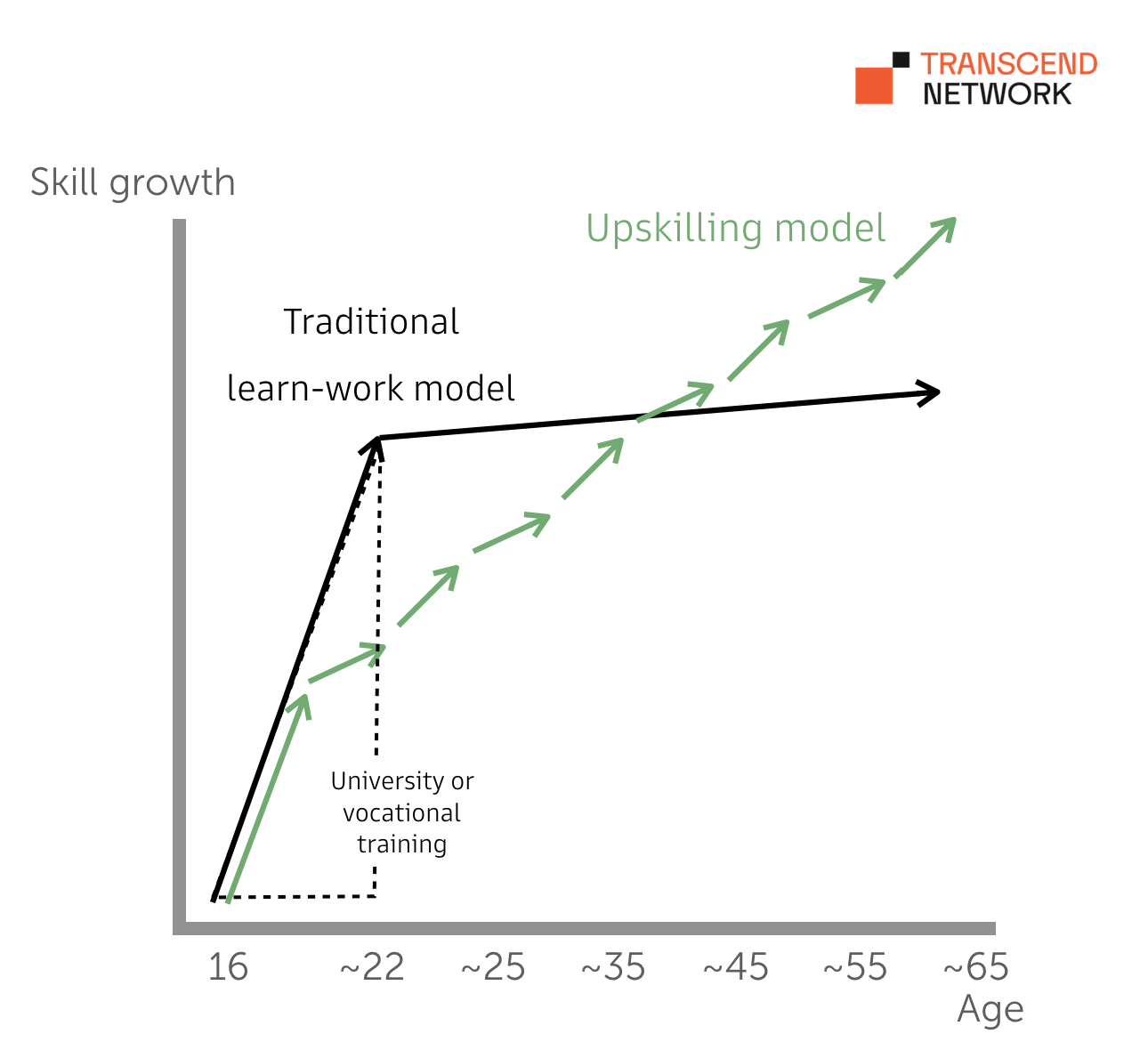 However, requirements for the modern workplace have shifted dramatically. The most important skills in the workplace shift every 5 years, requiring workers to be continuously learning in order to remain relevant and useful. 20 years ago, Microsoft Office was a standout skill for workers to distinguish themselves. Today, it is a requirement for nearly all office jobs. A 2018 study found that most adults wanted to go back to education, judging that online learning was in fact more effective than in person learning for their needs. Curricula in US universities can take up to 10 or more years to input workforce learnings and shift criteria due to the time spent acquiring appropriate faculty, facilities, and navigating bureaucracy. This necessitates a shift in the way we think about workforce education in the US.

Companies that can connect the millions of American workers to effective retraining stand to create a new wave within the EdTech space.

Broadly, workforce re-education strategies fall into a few key categories – reskilling, upskilling, and outskilling. These education categories are delivered through on-ramps to enter new jobs or education as a benefit to re-equip current workers. 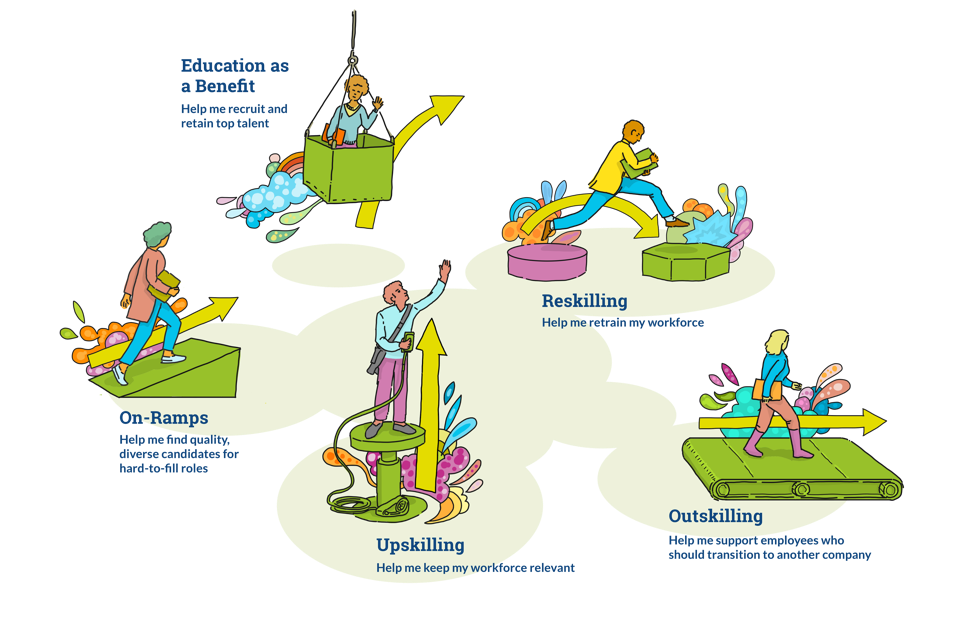 One of the most popular of these strategies has been leveraging a bootcamp model to re-train workers for new careers: a reskilling strategy most often used as an on-ramp to a lucrative computer science career.

Lambda School has raised over $100M on the premise. Ironhack raised $20M in January and CodeAcademy raised $40M in February. Within the past have recently raised funding rounds, indicating broad support for the institution type. These bootcamp schools leverage ISAs (income share agreements) to align incentives between the school and the students. Students pay no money up front, then pay a portion of their income for the first 2 years after they are placed in a new role. Within the month of February 2021, $110M was invested in the ISA model.

The ISA model depends on a high percentage of students being placed in new careers shortly after graduating from the bootcamp. This is because bootcamps require high up front capital expenditures to provide the education – administrative costs, instructor costs, and hosting costs. However, even the most prestigious and well funded bootcamps like Lambda school report struggling to place candidates, featuring just a 50% placement rate after 6 months, which amounts to only breaking even.

Why does Lambda School still struggle to place students post-graduation? Employers find their graduates to be lacking compared to others in the market, despite the elite bootcamp certificate.

Hiring is a high risk undertaking

When conducting user research for LMNS in the Antler accelerator, I learned that hiring managers see all hiring as a high risk undertaking because of the immense cost of replacement, which can be upwards of 50-200% of the salary for the role when accounting for the opportunity cost of time & money spent hiring (average of 30 days per hire) and the cost of the new hire’s mistakes while on the job before they are removed. Often unsalvageable is the social cost of backing a bad hire, which decreases a hiring manager’s standing within their organization.

Job training for new employees is no longer standard

The risk of this hire could be mitigated in part by on the job training, but hiring managers are increasingly expecting hires to arrive already prepped for their job. Most companies onboard employees for just one week. According to Gallup, only 12% of employees strongly agree their organization does a great job of onboarding new employees. Because of platforms like LinkedIn, Ziprecruiter, and Indeed offering increasingly granular targeting for high potential experienced recruits, motivation to train rather than hire experienced is low.

In my interviews while a cofounder of LMNS, hiring managers mentioned that they are not just looking for skilled individual contributors. They are often looking for soft skills that can’t be measured accurately in a generalist bootcamp setting. Employers want employees who will fit well into the company’s already established culture to work on the specific projects that are most important. Within the coding world, employers often want someone who has experience working in their specific coding language collaborating with others building a large codebase. To be scalable, bootcamps cannot offer this level of granularity in their curricula.

Why the apprenticeship model will wins at placement

Apprenticeships programs are similar to bootcamps in that they serve as on-ramps for new careers, but instead of being generalist, short, and cohort based, they are specific, long, and done on a one-to-one basis. Often, the cost of the apprenticeship is paid by the company that is hiring. This results in apprenticeships having much higher placement rates despite their higher average cost of operation.

Trends supporting apprenticeship model in US

Apprenticeships are more common in the UK than in the US because of government incentives. The British government offers tax credits to employers that hire folks directly out of high school, where the US does not. However, the new Biden administration has shown a concerted focus on creating jobs for Americans following the COVID-19 recession. The OMNIBUS bills passed by the majority Democrat congress contained other incentives to spur job growth. Given the popularity of hiring incentive programs on the left and the likelihood that job losses continue in affected sectors, it is reasonable to project future policy shifts in this arena.

Onramp is pioneering a new model for skills-based hiring. They combine upskilling with recruiting to create a hiring process more conducive to competitive outcomes for underrepresented candidates for technical roles. Over the past few years, they have worked on their model, which educates prospective candidates in apprenticeship style fashion over an extended period, catered specifically to the companies hiring

They have partnered with Google and Pandora as well as over 100 educational institutions, bootcamps, and online communities to create an effective pipeline. Though they are currently at the early stage, their apprenticeship style model is already showing results. Time will tell whether their model beats out the bootcamp model in the long-run.